Like many pedestrian city-goers, I think about route efficiency a lot: when to cross, which streets are the least crowded, when to take diagonals, etc. I also happen to frequent a bar that is somewhat of an edge case when I try to decide on which route to take. For the first time, I'm going to apply a little rigor to this problem[1].

On many Tuesdays, I exit the Metro at the Capitol South station (bottom left) and begin heading over to Capitol Lounge (top right). 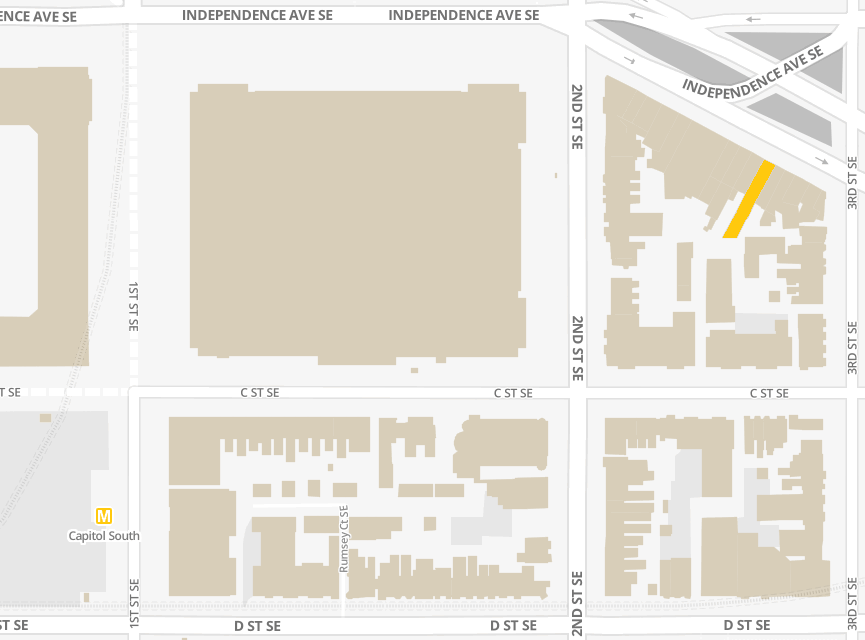 The first steps of the route should seem obvious: North on 1st, East on C (shown in blue). Until sometime last year, I would mindlessly take 2nd north to Pennsylvania, then walk southeast until I arrived (dotted red line). Then one day, while walking the route with my friend Alex, he proposed something radical and claimed that it was faster to stay on C and take 3rd north and backtrack along Pennsylvania (dotted green line). 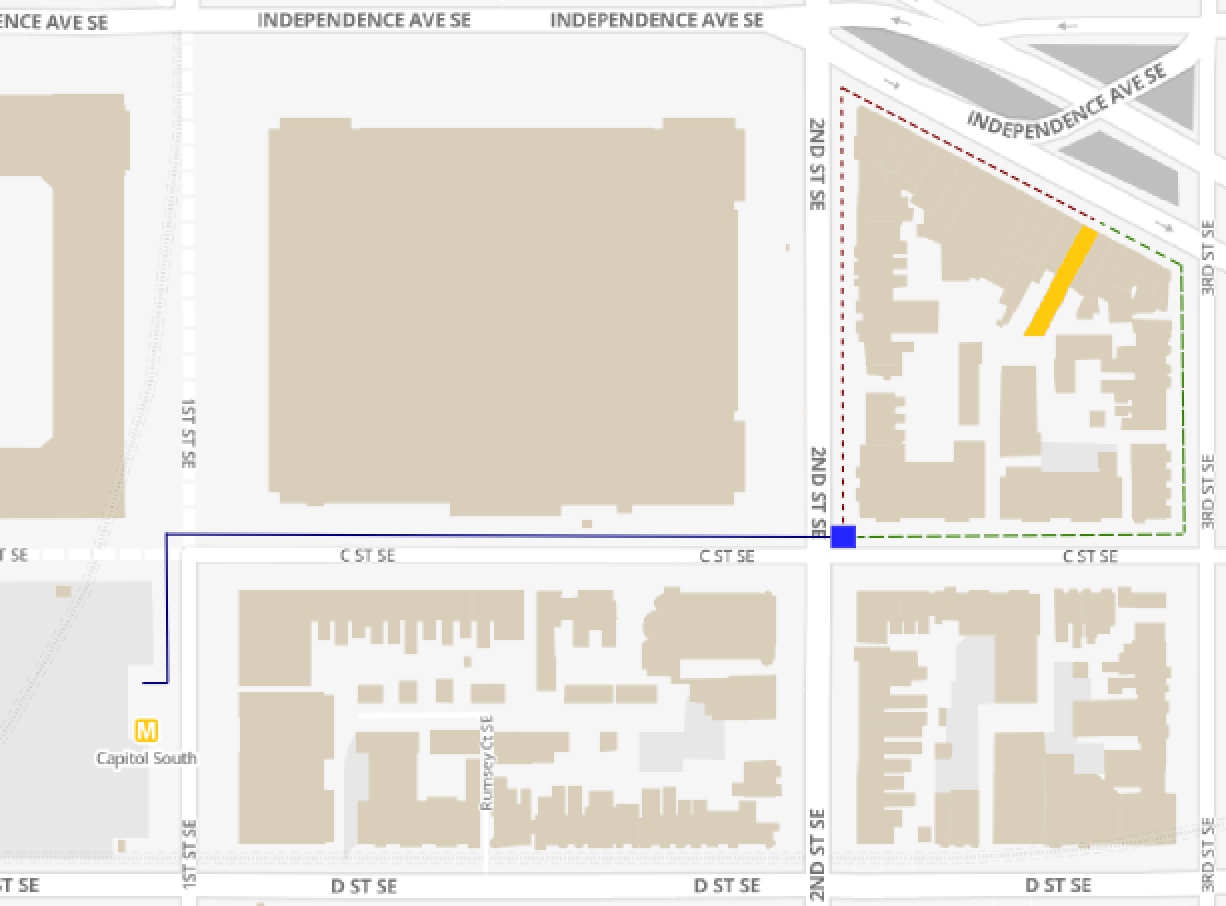 At that point, I wasn't convinced but I decided to give it a go. Normally, it's fairly easy to intuit which path is faster but in this case, it didn't seem so obvious. Every week, I would start the consider the geometry of the situation as...

Forget about the above map for a moment.

When walking from the bottom-left corner of a rectangle to the opposite corner on the top-right, there are two time-equivalent paths we could take ("up then over" and "over then up"). When we are dealing with a "dented rectangle", this changes our math a bit. I've constructed a simple diagram below with a blue dot at our starting point and an orange one at the break-even point (where either path is time-equivalent):

You can move the slider around to change the angle in the upper left corner. When the angle decreases from 90, our break-even point starts to move along the top diagonal to the left. If our destination is on:

After playing with this abstraction for a bit (first mentally and later while writing this post) and looking back at the map above, it's apparent that the destination is really close to what we would naively guess the break-even point to be. So, I had to break down and do...

And solving for x:

Probably not something you can rattle off in your head although it does reduce very nicely if width = height:

My very low tech solution for solving this was to look at the pixel values in the map and plug the corresponding lengths in the formulae above. We end up with x ≈ .7136 which shows up on the map like this: 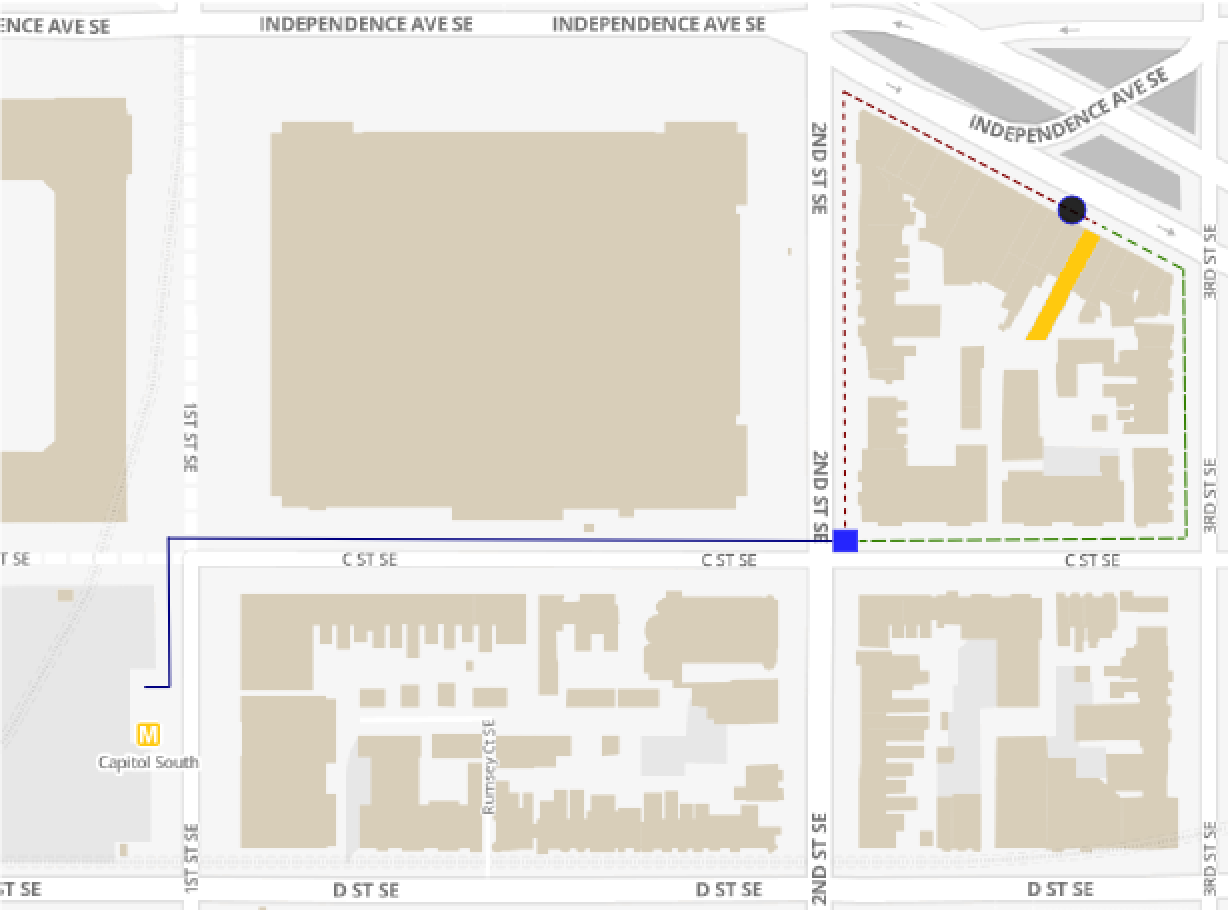 As suspected, the break-even point is super close to Capitol Lounge which is why this case was so hard to intuit without resorting to math. However, it is slightly faster (depending upon the accuracy of my measurements) to take the "southern" route as proposed by my friend Alex. And if you're rushing to get there before Happy Hour ends at 7, every little bit counts.

After writing this post, I realized that, should one be willing to bend the rules of the road a bit, the northern route is actually faster. Proposed route: 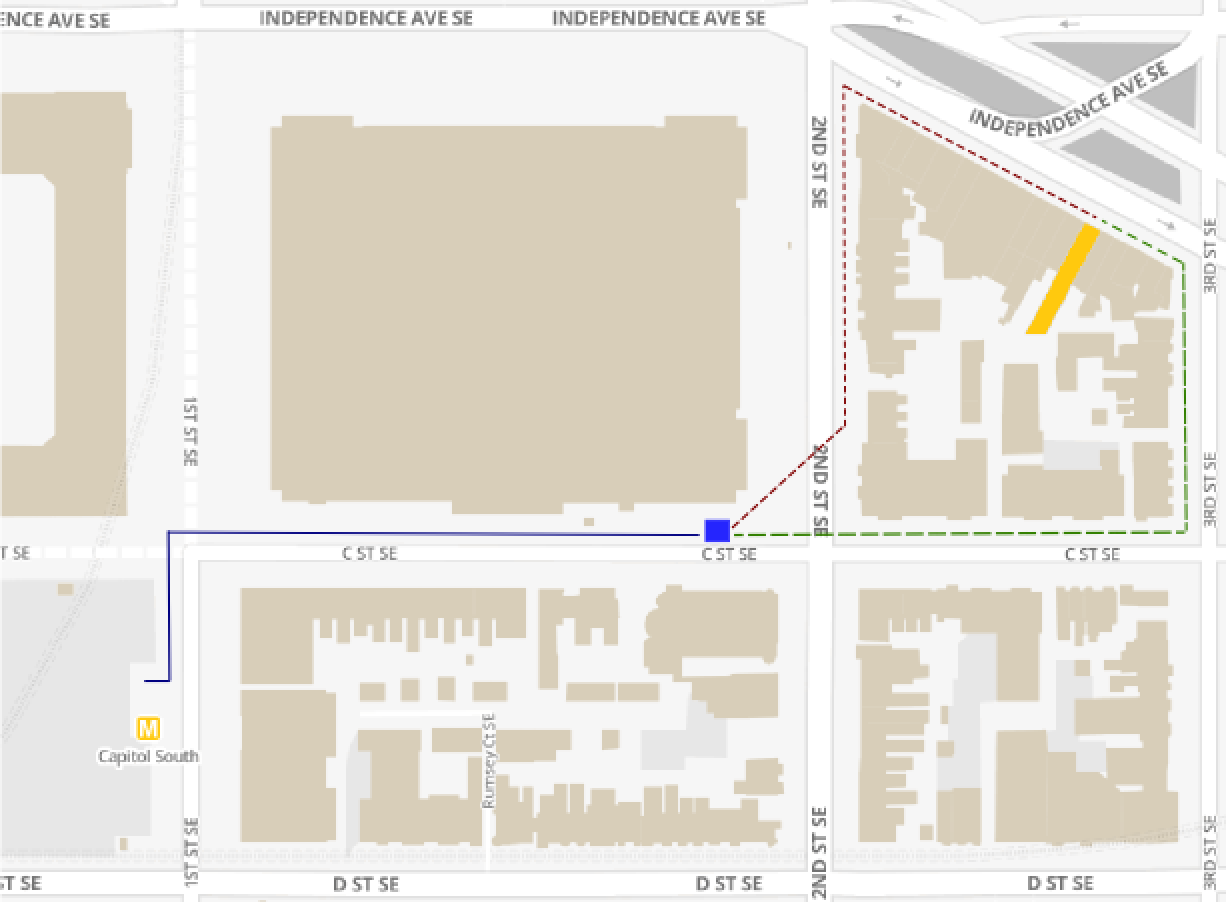 The diagonal across the road saves enough distance that I feel comfortable saying it's a little faster given how close the break-even point was. So, there goes all that work above.

1. I finally decided to dissect this relatively trivial problem after reading the excellent posts Kill Math and Don't Kill Math regarding visualization and mathematics education. 2. Although if you get any joy in watching a math major screw up some simple trig identities, you would have enjoyed looking over my shoulder while writing this.